The ANSA McAL Foundation is Chaired by Mr. A Norman Sabga, Executive Chairman of the ANSA McAL Group of companies.

In October 2005, the signature programme of the ANSA McAL Foundation, the Anthony N. Sabga Caribbean Awards for Excellence was launched. The goal of the ANSA Caribbean Awards is to recognize significant Caribbean achievement, to encourage and to support the pursuit of excellence by Caribbean persons, for the benefit of the Region. From 1991 to 2003 the Foundation received 1 % of profit ofThe ANSA McAL Group. By investing this endowment, the Foundation is now self financing and able to undertake in perpetuity the significant commitment of the ANSA Awards for Excellence programme.

Additionally, subsidiaries of the Group continue to make individual contributions to the aspirations and needs of the society and particularly of their communities. The more well-known sponsorships are Carib Brewery Ltd’s major contribution to Trinidad Carnival, Cricket (Carib Beer Cricket Cup) and the beloved Soca Warrriors’ qualification to World Cup 2006; The Trinidad Broadcasting Company’s VIBE CT105 major sponsorship of WC Connection; and the Trinidad Guardian Neediest Cases Fund. 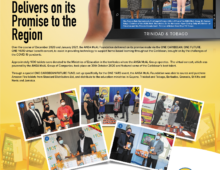 12-04-2021The Environment
ANSA McAL Supports Our Brothers and Sisters in St. Vincent and the Grenadines