In the footsteps of his father… Norman Sabga gets honorary doctorate 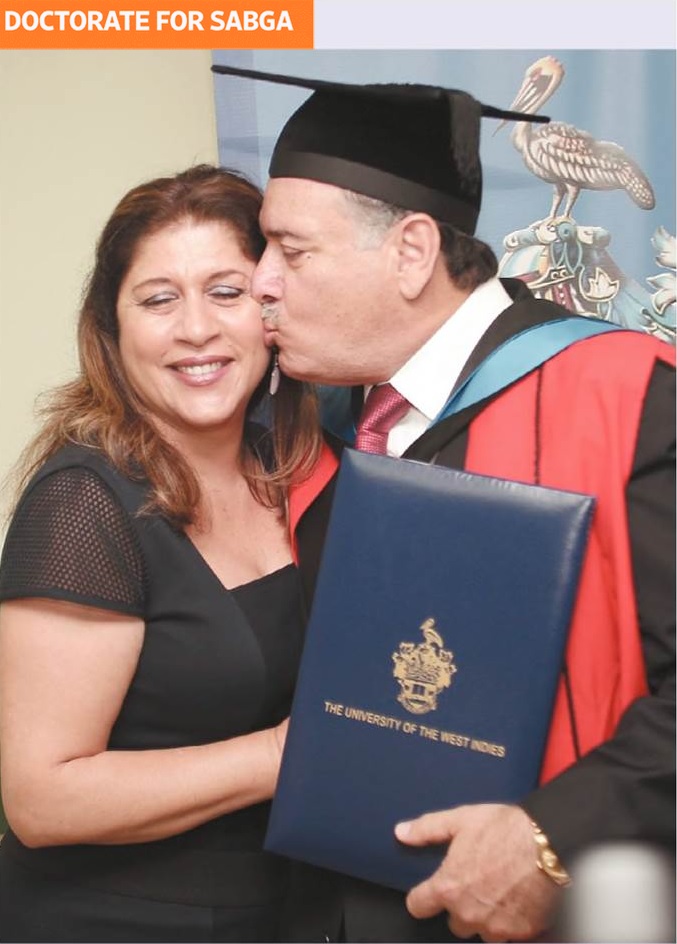 Group Chairman and Chief Executive of the ANSA McAL Group of Companies – Mr. A. Norman Sabga kisses his wife, Alma after he received his honorary degree of Doctor of Laws from the University of the West Indies during the presentation of 2015 graduates at the St. Augustine Campus on Friday 23rd October, 2015. PHOTO: ABRAHAM DIAZ

History was created yesterday at the University of the West Indies (UWI) St Augustine Campus as it was the first time that an honorary doctorate was ever conferred to a father and son.

The announcement came moments before the ANSA McAL Group chairman and chief executive of the ANSA McAL Group of Companies, A Norman Sabga, was conferred with the honorary degree of Doctor of Laws (LLD) by the chancellor, Professor Sir George Alleyne.

The conferment of the degree took place during UWI’s Social Sciences graduation ceremony and was witnessed by Sabga’s parents—Dr Anthony N Sabga and mother, Minerva—and other members of his family.

In 1998, Dr Anthony N Sabga, founder of the ANSA McAL Group, who holds the title of chairman emeritus, was also the recipient of a Doctor of Laws Degree, honoris causa, from UWI.

It was also announced that recently a memorandum of understanding was signed with UWI to establish The Guardian Media School of Journalism and the Anthony Sabga School of Entrepreneurship. The two initiatives are said to be in the final planning stages of physical development.

According to Alleyne, Sabga has placed premium value on an educated society and so has built a strong relationship with UWI.

The ANSA McAL Psychological Research Centre, formally opened in 1989, lends research support and teaching services to over 1,200 undergraduate and postgraduate students as well as to academic staff.

Sabga has served on the council of the St Augustine campus for the past two years.

In delivering the feature address, Sabga revealed he had never graduated from university because of the demands of life that required him to leave Fordham University in New York to return home to T&T to join the family business.

Quoting the words of Robin Sharma, Sabga said: “To be a leader is not to have a huge position. To be a leader is to see your job as a chance to inspire the world, no matter what that job may be.”

Sabga also used the opportunity to share with the graduates some of his personal discoveries that have served him well.

He said: “Be humble and let your morals, values and integrity guide you. The decisions that you make at every turn will not only define where you will be tomorrow but more significantly who you will be.

“Nothing is achieved without hard work. This single statement resonates with me and continues to be one of my core beliefs.

“As current trends and history have taught us, those who try to achieve success without sacrifice, ultimately deceive themselves and others. Nothing worth having comes easy and if it is easy to get, nobody wants it.”

Sabga related that he has had good fortune but emphasised that he could not have done it alone.

“I am surrounded by some brilliant, intuitive thinkers and doers, and together as a team, we have made the Ansa McAL Group the most successful conglomerate in the region. Allow those around you to flourish and share in the success,” he added.

He explained that he too experienced hardship but he kept dreaming bigger and urged the graduates to do the same.

He said: “Everything starts with a dream and like all dreams they are littered with challenges and tastes of failure.

“I don’t know of anyone who has achieved something significant without also experiencing their share of hardship. I too, have walked down that road, so, don’t let obstacles stop you from dreaming or hamper your journey to success.

“Don’t believe that something in your past prevents you from doing great work in the future. Dream big, and use these dreams to fuel and motivate you in your quest for success,” he added.

Ending with the words of his father, Sabga said: “Don’t waste it on doing something that brings you unhappiness. I have always been guided by the words of my father, Dr Anthony N Sabga, ‘Find a job that you love and you will never have to work a day in your life’… I did.”